Below are the spec sheets for the RRD X-Fire V6 courtesy of the guys from seabreeze. 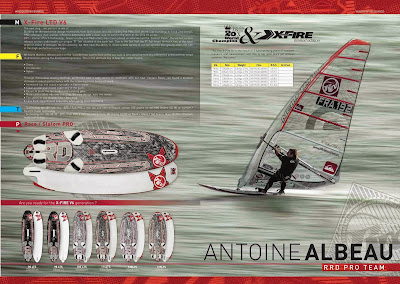 A lot of marketing on that sheet IE "Toro Tail" / Trim Tail but what I will say is it seems like the RRD guys got it right with the V5 as the Antoine and Julian got 1st/3rd respectively for the PWA Slalom rankings.   At my home spot you didn't really see or hear about RRD until Antoine switched to them last year.  Currently I believe there are only 2 guys with RRDs, Lorenzo with his FireMove and Raviv with his FireRide.  If I were to get an RRD it would probably be the X-fire but it wouldn't be my top choice though as I don't like the cut outs.  The 90L doesn't seem to have any but for me I still feel its too wide.  For slalom I'm sure it does well but for my sailing style I'd prefer a 95l to be 55 wide at most so maybe 50-52ish for anything smaller.

Lorenzo has told me he would like to get the X-fire but I asked him whether or not he would really benefit from getting one (his gybing is a bit off still).  We will see though what he does! Maybe I'll even be able to write a review on it! 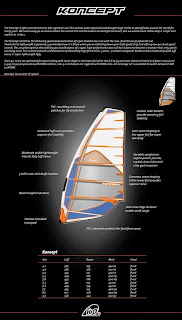 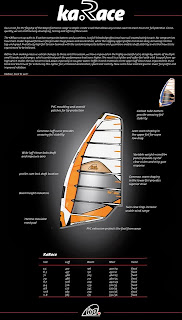 Anyways back to the specs, the luff/boom lengths seem to remain the same from 2013 which is a good thing.  I am also really digging what they did with the upper portions of the sails.  I feel like this would definitely increase the durability of that section.  My older Koncepts have monofilm there and wear down faster than the rest of the sail as they are looser in nature than the rest of the panels.   Another interesting fact according to KA is that the 6.2 and smaller have been optimized for speed sailing with more shape in the lower foil while the 6.6 and bigger are optimized for slalom and across the wind sailing.  This kind of worries me as my decision was to go with 5.4 and 6.6 but now I'm considering changing to a 6.2.  Maybe even a 6.3 KA Race would do?  I'll see what Jurg thinks